West Bengal kicks off its Assembly elections 2011 today with voting for the first phase in 54 constituencies. People are expecting a close finish between the Left parties and TMC.

West Bengal Assembly elections 2011 will be conducted in 6 phases. The first phase is today, 18th April, followed by Phase 2 on 23rd April, Phase 3 on 27th April, Phase 4 on 3rd May, Phase 5 on 7th May and the last sixth phase on 10th May. Assembly Results will be declared on 13th May along with the results of 4 other states which have already completed their voting.

West bengal is expecting an intense battle between Buddhadeb Bhattacharya’s Left Front and Mamata Banerjee led TMC. CPM has never been made to sweat so hard before in Bengal. For the past 35 years, they have ruled the state almost un-opposed. But, if opinion polls are to be believed, this time Mamata is going to rout Left parties out of the state. Mamata is fighting the elections with Congress as an ally. Congress may just prove to be the weak link in this years polls for Mamata, as the number of scams that have come out during the Congress regime in last few months have severely dampned the credibility of Congress.

The regions of West Bengal that go to polls on 18th April are: Coochbehar, Jalpaiguri, Darjeeling, North Dinajpur, South Dinajpur and Malda. 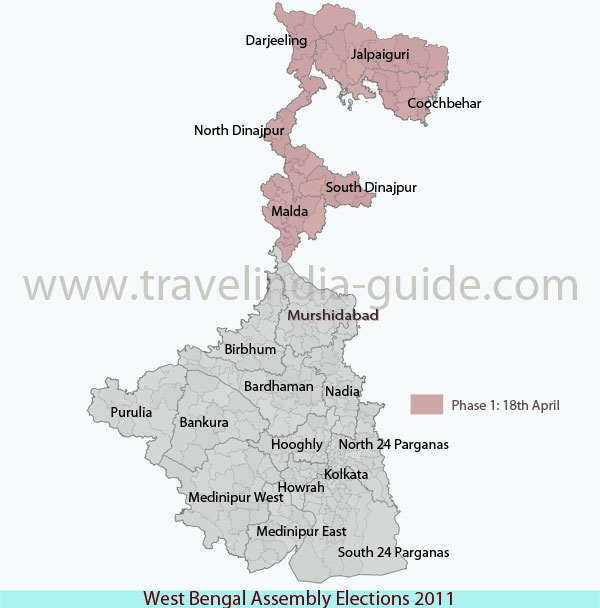