Gujarat Elections 2012 are scheduled to be held in Nov-Dec 2012 and it’s current Chief Minister Narendra Modi is currently on a month long campaign in the state. Though reports suggest that Modi has a good chance of winning the state elections, what happens if he fails in Gujarat?

Congress has done everything possible to lose the elections in at least next few years. Price rise, scam, non-governance, policy paralysis, corruption…you think of it and Congress Govt has given it to you. But strangely, they continue to find allies and they continue to rule India. 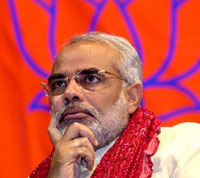 It’d seem that because of Congress follies, BJP would be the clear favourites in India. But it is not so easy. Partly the blame lies with the way BJP has behaved in last few years. The party lacks a clear direction, the leadership at the top seems void of ideas and there are too many voices speaking in different directions. Adding to BJP’s woes are opportunist political parties like Samajwadi Party and BSP. Such parties will continue to support Congress because they see personal gains with Congress. For these parties, corruption or price rise is not an issue, but talking about Hindutva is a BIG issue.

BJP has off late also been unable to gain allies. What they currently have as allies is also very uncertain. Nitish Kumar has already given ample signals that he will not support Modi as PM, his party JD(U) is going to fight Gujarat polls against BJP. Punjab’s SAD is already being approached by Mulayam Singh with rumours about a third front. Mamata and Jayalalitha are not going to touch BJP in fear of losing Muslim votes. Truth of the matter is BJP has forgotten to talk about Hindus and Muslims are never going to vote for the party. Unless BJP can find a solution to their communal tag, it’s going to be very difficult for them to win the upcoming elections. BJP needs to learn how Congress deflected the anti-sikh tag after the riots in 1984.

Gujarat is no doubt one of the fastest growing states in India. Narendra Modi has put the state on the world map as a fast growing economy, but his hindrance has been the Godhra riots. Communal rots occur across India, recently Congress ruled Assam saw a devastating riot which went on for months. But nothing gets as much coverage as the Godhra riots only because it happened in a BJP ruled state. All the growth and upliftment that the state has seen gets overshadowed by the political parties talking about secularism.

The Political Games begin in Gujarat

Congress, SP, BSP and even JD(U) are united against Narendra Modi. Congress knows the tricks of the trade and they know how to win elections by hook or crook. SP and BSP knows how to change every situation in their favour and JD(U) is looking to show Modi down. Even insiders from BJP like former CM Keshubhai Patel have revolted against Modi and are sure to dent on BJP votes by taking away their community votes.

Road to Gujarat elections 2012 is not easy for Narendra Modi. He is in it all alone and if he wins he will have a good chance of becoming the PM of India in 2014. If he loses,BJP will be left rudderless and with absolutely no option to form a Govt ion 2014.